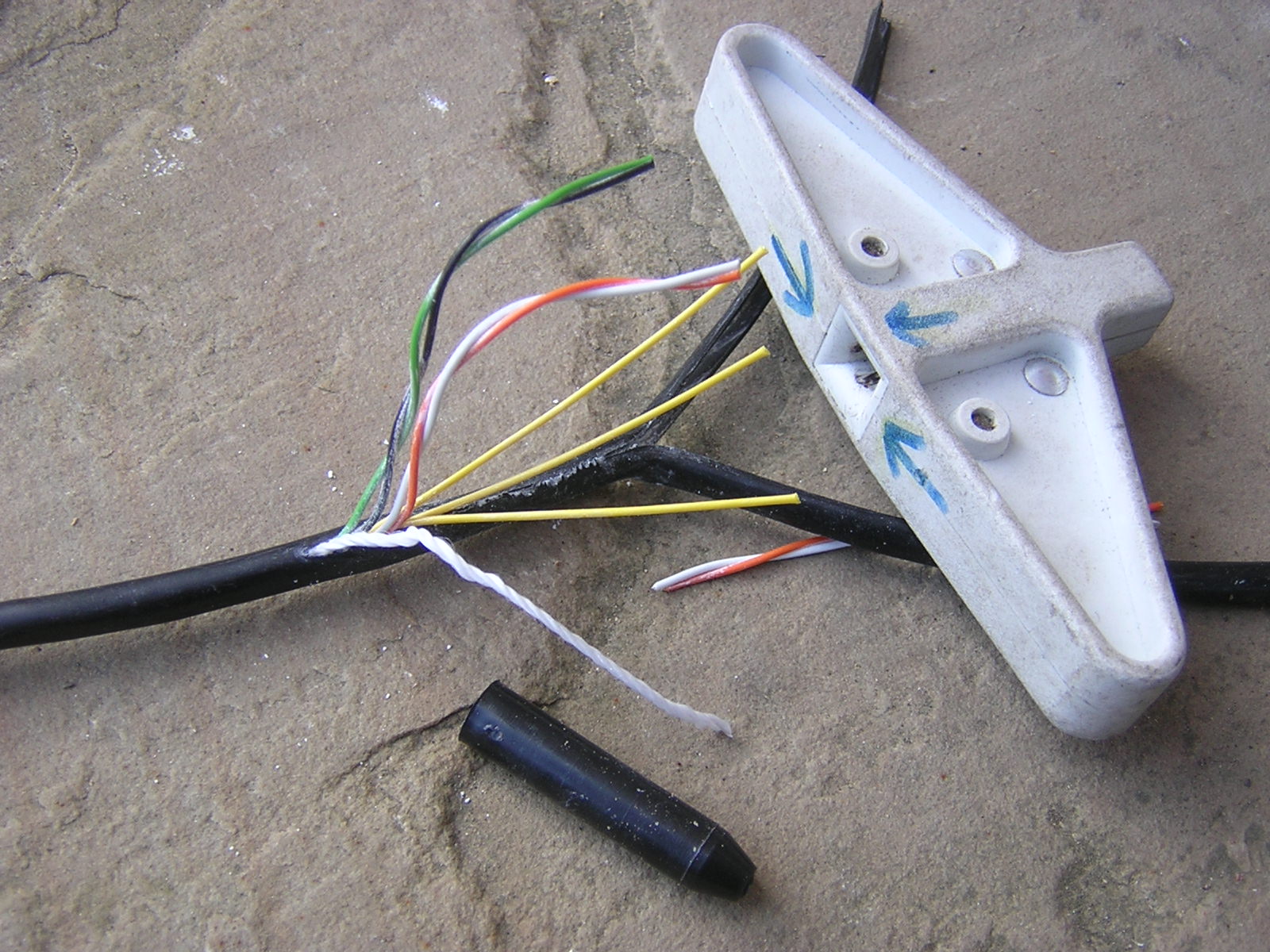 BT dropwire telephone cable – we shouldn’t really be talking about it, as it runs from the master socket onto the BT (more correctly Openreach) network. Of course, no-one ever gets involved with that side of the network, do they…?

This blog, therefore, should be seen to serve as purely educational and theoretical, the sort of stuff useful for obscure pub quiz questions. (That’ s the official bit over with.)

A traditional, long-established telecommunications term for some wire that “drops” from an “overhead” (pole) to your premises.

No. It can run through thin air unsupported for up to (officially) 68 metres, so has to be strong and weatherproof. Therefore, it has a thick black sheath, is resistant to sunlight-induced decay and moisture, and contains three high-tensile steel wires which serve to carry the weight of the cable and stop it drooping excessively and/or snapping. These are weight-bearing only, very strong, and don’t carry signals. Overall, it’s so tough, you could probably tow a van with it. Someone probably has.

Why Are The Colours Different To Internal Cables?

(No idea! They just are, right? Get over it!). However, it’s not complex. The first pair normally used are orange and white (pairs are easy to identify as they are twisted together). The second pair are very easy to remember – Green and Black, also the name of a brand of posh chocolate.

What Do I Need To Know About Handling It?

If (in theory, of course…) you had to strip it for jointing, then the sheath is seriously tough. Therefore, it is very easy to cut through a vital wire and damage it when trying to strip it. (Ask me how I know.) Then, when you’ve broken the sheath, it’s hard to pull it back from the wires to gain access. Once bared off (as per my photo), the steel span wires are exposed. These are more like sharp, bendy needles than wires, and can seriously hurt you. BT have produced a small cover (Dropwire Sheath – the bullet-shaped thing in the photo above) to cover the bare ends for this very reason. You will need a very good pair of cutters to sever them, and they you may be left with short and nasty pieces. Take care.

Surely There Must Be An Easier Way?

Yes. BT designed a clever tool (in the picture above) which slices open the dropwire lengthways, not crossways. There is also a piece of “rip cord” contained in the cable (bright white, also in photo), but I’ve never been able to make it work. However, stripping BT Dropwire Telephone Cable with the tool takes seconds. Unfortunately, the tools are at least £15.00, so not really viable for a DIY person (not that you’d be messing with the BT/Openreach network anyway, would you now?)

How Do I Joint It?

Jelly crimps inside a Dexgreen or 3M-type enclosure. It makes a formidable joint, and is used by Openreach. A search for “Dexgreen Dexseal” should take you there.

Not easily due to it’s thick sheath. Bear this in mind when running it into socket back-boxes. It’s designed to go in a straight line, through the air, for a long way. If you have to fit in somewhere tight, strip the sheath back first.

How Do I Secure It To Masonry?

Use good-quality P-clips. Beware that some P-clip nails seem to be made from aluminium bend too easily and generate much bad language. Where clips won’t work, use masonry mounts hammered into pre-drilled holes with black cable ties. Possibly a bit of “overkill”, but often faster than clips and far more effective. Screwfix stock them.

Can I Buy Dropwire and Joints?

But My Dropwire Is Thin and Grey…

This wire was superseded over thirty years ago, and is known to slow broadband signals down due to it’s design. It will now be old enough to have cracks in it which let in water and cause line noise. However, Openreach will charge you to renew it, even though it’s their hardware (no – I don’t understand, either). This is, of course, unless it falls down on it’s own, which has been known to happen. (Well, sort of “on it’s own”…)

Most telecommunications cable has a 0.5mm diameter core. Some dropwire (notably dropwire 12) has 0.9mm core. The two sizes won’t punch down on the same connector pin together, so you would need to be clever with jelly crimps and 0.5 mm wire. I found this out the hard way, early in my engineering career.

Intermittent Faults on Dropwire. Often caused by tree branches rubbing against it in the wind. Line noise will be heard more clearly in windy weather. Only an analogue meter will pick this up, the occasional needle swing showing high-resistance or a short as the branch moves,particularly when wet. It takes a lot to damage dropwire like this, but it has been known, due to several years of rubbing. Make sure it’s not a tree on your land, or you will be charged for the repair.

If I have time, which I have less and less of these days.

However, here’s the deal – I give the advice, you leave some feedback on Facebook or Google. Agreed? Super! I can also find independent engineers across the UK if you are struggling, and the same deal applies. They will have both tools and experience in handling BT dropwire telephone cable.