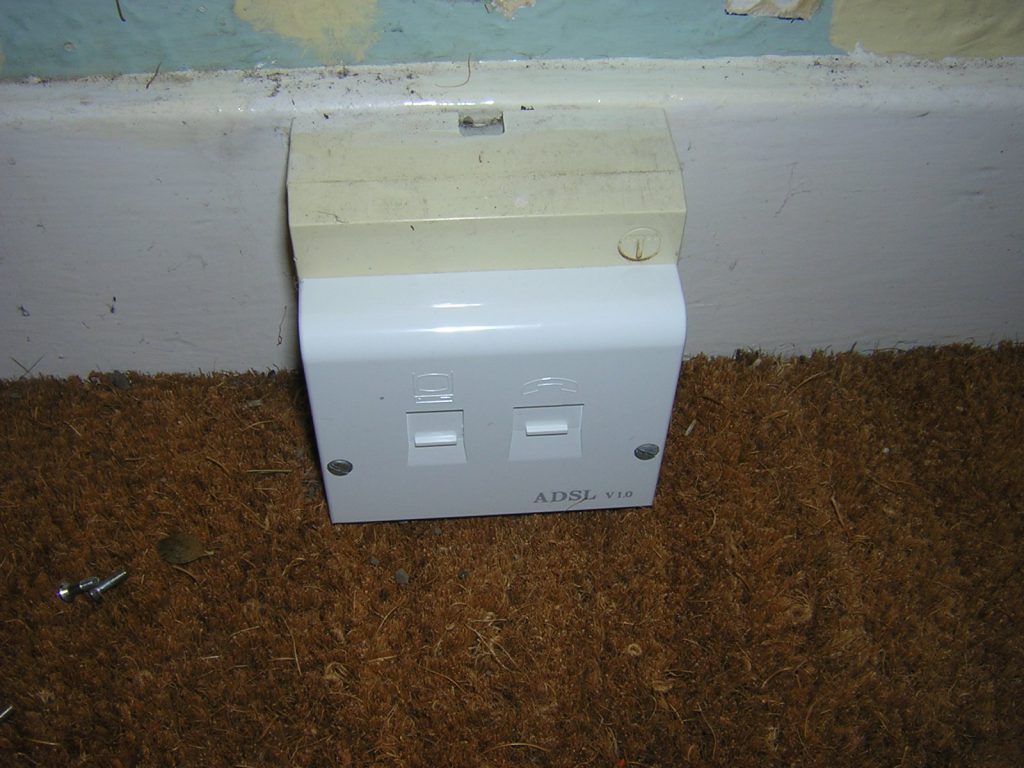 In an earlier blog (that people seemed to like!), I explained in no uncertain terms that moving your BT Master socket was potentially A Bad Idea.

But That’s Not The Full Story…

There is a way of translating exactly what your BT Master Socket does to wherever you’d prefer to have your broadband router plugged in somewhere else in your house.

Totally legally, easily done, and without compromising your broadband quality by mixing it up with other stuff (which might interfere and slow it down). Please read on!

What Does A Master Socket Do, Anyway?

There’s nothing mysterious in it. It simply serves as the border between you wiring and that of Openreach (former BT). It’s an electronic boundary post, first and foremost. It’s a physical break for testing Openreach’s supply to your house.

Two terminals/pins marked A and B are behind that socket front, and your broadband and telephone traffic arrives on these. I’m frequently amazed that 50mb can arrive via two 0.5mm wires. But it does.

So, what if you wanted to move those two wires that arrive in your house to somewhere else?

a/ Move the master socket. (We can’t really (officially) do that. But it’s possible, with additional cabling and jointing)

b/ Take a “feed” of your incoming “filtered” broadband signal and take it to where your broadband router needs to be (quite easy, thanks to the provision of two connections called “A” and “B”. ) Puzzled?  Don’t worry -read on.

These are two pins on the customer side of later-model master sockets. They give just the same signal as the smaller socket on the front of the master socket, namely a nice, clean broadband signal, straight from the network, filtered of any nasty telephone-extension or wiring noise.  Less interference means more speed.

N.B.! This is an already-filtered output – connecting another filter onto this filtered signal will stop the broadband working.

What on Earth Do I Connect Them To?

Take a look at the lead from your broadband router. The plug at the end normally has two adjacent gold pins.  We need to get the “A” and “B” signal to them.  Don’t worry – we will.

Here’s the vaguely technical bit – an ethernet socket (the kind that can be seen in business data networks) has a number of colour-coded pins (similar in style to the “A” and “B”).  These are marked on the rear. There is a pair which is shown as “blue and blue/white”.

Your router lead plug, although smaller, will actually fit into an ethernet socket and clip in fairly securely.  The two gold pins on the plug will connect with the blue-blue/white connectors.  All you need to do now is to punch down the wires coming from “A” and “B” on the master socket ontot these connectors, and you’ve delivered a filtered broadband service straight from your master socket to your router.

Yes it does, but trust me, it works!  I carry out considerable work for a major UK pub chain, and their electronic stock control and till system, utterly critical for their business, uses just this method at most sites to connect to their head office.

However, someone, no doubt, will comment below that this is some kind of bodge.  Well, if you want a more elegant solution, find an RJ11 socket (designed to fit your modem lead).  Not as readily available as the RJ45 (ethernet) socket, but the better way of doing it.  Beyond that, if you have steady hands and the right tools, crimp an RJ45 plug onto your router lead.  (There – that should silence the smarty-pants people…)

Oh, a P.S. You’ll need a wire insertion tool. A jolly good thing to have, and with useful life beyond this project. Again, eBay/Amazon.  Also called a “Krone Tool”

All the above is normally available on eBay/Amazon.

Quality Cable – You Need It

Use professional-quality telephone cable (from…guess where..?). This will have solid cores (not braided, that is, made up of tiny strands crushed together). It will also have a “twist” in the pairs of cable, a bit like a hair plait. This feature means you lose less of the signal as it travels down the cable. This is also available on-line. This is more important than it seems, trust me. I’ve blogged about it here .

Make sure you run the cable between the two sockets, away from anything significantly electrical, such as TV, monitor, central heating pump, power supplies, transformers, nuclear power stations, GCHQ listening stations, fluorescent tube lighting, Daleks, or consistently parallel to mains cables, etc., etc. You won’t manage to dodge all of it, but do your best! Outside the house is often good, provided external cable is used.

Check For Signs of Life

Your router should boot up. Sometimes it takes a while.  Polarity of wires (i.e. which way round they go) is not critical.  Amazingly, broadband will even function on a single wire, but at half-speed or less.  If your speed has dropped suddenly, check your connections.

You’ve just “moved” your master socket.  Your old “A” and “B” have been translated to the new data socket. Your broadband signal should be free of interference.

“Don’t you lose some of the broadband signal via the cable run to the new socket?”

Well, provided that you are keeping the new cable fairly clear of any source of interference, you won’t lose much at all, probably about as much as you would if your house was a few yards down the street, and further away from the exchange.

Yes, instructions found in some new sockets supplied by Openreach stress this. It’s a source of much debate among professionals, including some that I network with on-line. I don’t think it makes any difference – it has arrived at your house along non-Ethernet cable so far, often a couple of miles from the exchange. There are even those who say that broadband was actually designed to run on traditional telephone cable.There’s casual evidence from a former BT senior engineer “insider” that this is correct.  So, providing that you use solid-core, twisted-pair cable (that is, professional-grade stuff, not cheap and nasty, often used by burglar alarm companies), losses should be minimal.

What About Plugging My Phone Into This New Socket?

The aim of using the filtered “A and B” is to separate your voice (telephone) service from your broadband at the point of entry, via the superior filter of the master socket.   If you need to supply a voice service, cable from pins 2 and 5 on the maste socket and run a separate cable.  Alternatively, use a cordless phone with the base either plugged into the master socket, or on a short, hard-wired socket.

Why Can’t I Joint Straight Onto The Line?

“Can’t I just connect to the A and B on the back of the original master, the ones that have BT/Openreach’s incoming line connected?”

No. That original master needs to remain as the boundary between your premises cabling and their network, via the detachable frontplate. If you’ve ever had to deal with a persistent line noise problem (and dispute), believe me, it’s vital to have that demarcation point. Remove the front plate and you can prove that the problem is on Openreach’s side in seconds.

Won’t A Joint Do?

Well, you could, providing it doesn’t cause a fault on the Openreach network. If a fault develops, Openreach send an engineer, and it appears that you’ve bodged the joint, therefore causing the problem, they may sting you for a £200 reinstallation fee , especially if you’ve put a short circuit on their network. And most non-engineers don’t know how to joint in-line cables in the same way that engineers do. So it’s very hard to hide the evidence.  I’ve seen it done…

Most master sockets were located in ground floor areas near the point of cable entry, typically the hall or front room. Rarely were they put elsewhere. £20.00 on materials, or a potential £200.00 fee?

Oops. This blog has got quite long!

There’s much more on-line on this topic. Thanks for your patience!

I try to keep the site ad-free, but if this information has been helpful, please consider leaving some social media feedback:-

This helps me to continue giving free advice.

I might be able to help I cover Middlesbrough, Darlington, North Yorkshire and beyond, as I’m a telephone engineer based in Stockton on Tees, So, if you need me to come and sort anything out, please get in touch!