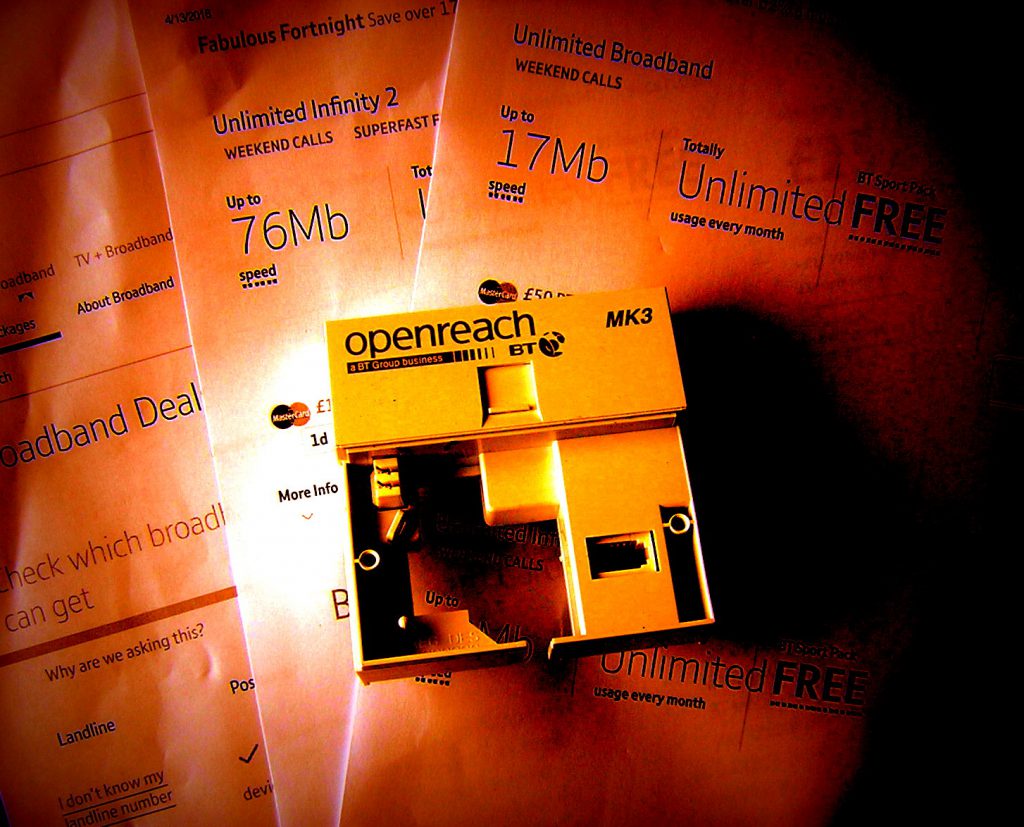 First of all, I’ve got to make it very clear that moving a BT Infinity Master Socket (or any other BT master socket) isn’t really something you should do. (Well, not officially…). It’s the equivalent of moving your gas or electricity meter. It’s the supplier’s (or their suppliers) equipment. In this case, it’s Openreach. But happily that’s not the end of the story. You don’t have to keep tripping over your modem as you come in the front door.

I’ve blogged elsewhere on this BT master socket issue . I’ve never heard of someone actually being fined for moving it.But if the Openreach engineer comes to see you to sort a fault and finds that you’ve obviously moved your socket or jointed your cables in an unsuitable manner, he’ll bill you for the work to bring it back up to Openreach network standard. He’s entitled to, because you’ve fiddled with what’s technically part of Openreach’s network. Now you wouldn’t go lifting up manholes in the streets and fiddling with their cables, would you?

Fibre is “Something Else”

And another key thing I need to tell you – if your broadband arrives via optical fibre, you won’t be able to move the “BT infinity master socket”. Optical fibre is nothing like copper cable to your house. It’s complex, delicate and potentially dangerous stuff. It needs a box on your wall called an “Optical Network Termination” to connect between your modem and Openreach’s network.

However, if your broadband arrives by a traditional copper cable, it’s not that different to the broadband you probably had before, except of a faster type (called VDSL2). However, BT only promise higher speeds when they can try and dictate how the broadband is distributed in your house. So it has a specific type of master socket, and a specific type of cable to run an extension. More on this later.

You Can Move Your Router…

So, having said all this, you don’t have to put up with having your router next to the BT infinity master socket. You can transfer what comes in to your house to somewhere else in the building. Plus you won’t lose speed if you follow some clear guidelines.

One option is to run an ethernet cable from the sockets on the router to another ethernet socket in your house, even up to 90 metres away. The ethernet (a.k.a. Cat 5/Cat 6) cable is capable of high speeds. But your router would stay by the door.

The second is to leave your BT infinity master socket where it is.  Then run a new cable from it to another “master socket”-type socket. Now, care needs to be taken here that the cable is of a suitable quality, that is, solid-core, copper, twisted-pair telephone cable.

There’s Cable. And Then There’s “Other Stuff”

This is critical, trust me! A cable is more than just a piece of wire between two points. Bad cable can slow down good broadband. You can read more about this on my blog here

Professional-quality cable, of specification CW1308 can be bought by the length on eBay and elsewhere. Some of this might be manufactured by “BT Cables”. It’s the stuff that Openreach probably use themselves. And the appropriate sockets are available, too.

Connections Between the A’s and B’s

The first BT infinity master socket has two pins, marked A and B , onto which a single pair of wires from the cable can be attached. These simply duplicate what comes into your house. So, if you have a second socket, of a similar design to the first, they can connect to A and B on that.

Providing the cable is run away from things like microwaves, TVs, monitors, light fittings, this cable won’t slow the speed down.

Just don’t connect anything else to it on the way. Really, if you truly value your speed, then just don’t!

And don’t use existing cable.  You will never know what a previous owner may have connected to it. Plus, you don’t know where it has been in the house, picking up electrical interference on the way.

Just to reassure you, your broadband already runs on similar cable. The cable from that street cabinet which says “Superfast Broadband is Here” to your building. It’s copper, twisted-pair cable, running underground, up poles and through overhead cables to your house. The last few metres from one socket to another won’t make much difference to speed. Providing the correct type of cable is run correctly through the building.

Help Is At Hand

It’s not all that difficult. But if you’re struggling, and live in the Middlesbrough, Stockton on Tees, Darlington, Co. Durham or North Yorkshire areas, please get in touch, as I’m not too far away. And I may be able to help.